"If you build it they will come…" is the old saying from the movie Field of Dreams.  It also could be used to sum up Ohio’s energy policy toward growing green jobs.

Governor John Kasich has not revealed his true feeling regarding the Renewable Energy Portfolio (called the Advanced Energy Portfolio Standard in Ohio) which mandates a certain percentage of electricity should be generated from renewable sources like solar, wind, biomass and others.  Ohio’s RPS was instituted as part of Governor Strickland’s major energy legislation- S.B. 221.

While the Governor has not …

With about ten days until election day races around the country are getting more heated.  Ohio’s race for Governor is a study in contrasts on many issues.  Energy policy is certainly one of them.

Governor Strickland has pushed the development of advanced energy projects aggressively during his tenure.  Through passage of Senate Bill 221, he created the states… Clean Ohio Council has expanded the types of eligible projects that can receive funding under the Clean Ohio Revitilization Fund (CORF).  Parks, urban waterfronts, solar and wind projects are now eligible for funding so long as these projects take place on a brownfield.

On April 15, 2009 the Public Utilities Commission of Ohio finally adopted the long awaited rules that will govern Ohio’s energy efficiency requirements and its Alternative Energy Portfolio Standard (AEPS).  Ohio was one of the last states to have adopted a Renewable Portfolio Standard (RPS)- more broadly defined as a AEPS in Ohio.  However, as…

I have been following discussion regarding the green elements of the

Presidents Stimulus Package, known as the American Recovery and Reinvestment Act of 2009.  There is certainly a lot directed toward environmentally related projects, especially renewable energy development.  Leading some to call these provisions the "Green New Deal."

What is the real story behind some of the spending that has been reported?  You certainly can find information all across the web and on government sites that simply lists the amount of money in the bill and which program it has been directed.  However, detail about what the money will really be used for can be hard to find.

Bottom line, some provisions are better than others.  For instance, much of the money directed toward U.S. EPA will pay for existing projects.  This includes prior grant applications, clean ups already under contract or projects previously selected for funding.  So, for many of you expecting great new opportunities for EPA related projects, I don’t think the bill offers you that much. (with the exception of diesel engine related grants- see below).

The renewable energy side of the equation is a totally different story.  There are continued and new tax incentives as well as new grant opportunities.  There is a lot in the bill and it will literally pay to stay on top of what is available.

I.  EPA Side- the American Recovery and Reinvestment Act of 2009 specifically includes $7.22 billion for projects and programs administered by EPA.

Below is a description of the major areas of funding as well as an analysis of whether this funding presents new opportunities. EPA has established a web site page with helpful links that discuss the opportunities in the Stimulus Bill relative to the money designated for EPA.

Brownfields:  There is over $100 million directed to U.S. EPA’s brownfield redevelopment program.  I was intrigued regarding this new slug of money for it could present another great opportunity for clients outside of the Clean Ohio program.  However, after asking for more details from U.S. EPA, I learned that this money is basically already spent.  The U.S. EPA intends to use it for projects that requested funding back in 2008 but were not funded due to an over abundance of proposals.  While its good news more projects are getting funded, I believe U.S. EPA could have even received better project proposals if they would have allowed for new applications.

Diesel Emission Retrofits Act (DERA):  The Stimulus directed over $300 million in new money to fund the DERA program. DERA is the federal grant program that pays for diesel engine retrofits, repowers and replacements.  Last years allocation was only $50 million for the entire country.  So the Stimulus does provide real, new money for this program.  U.S. EPA intends to spend the money quickly so watch U.S. EPA’s website and Recovery.gov to jump in with your project.

Underground Storage Tank (USTs) Cleanups: $200 million was provided to U.S. EPA’s Leaking Underground Storage Tanks (LUST) Program, EPA provides resources to states and territories for the oversight, enforcement and cleanup of petroleum releases from underground storage tanks (USTs). EPA estimates that every year 7,570 new releases occur which just adds to the sites that have not yet been completed.  There could be as many as 116,000 sites requiring clean up actions in 2009. However, it appears the funding will be used to help pay for clean ups of abandoned tanks rather than create a new grant program.  Here is additional detail from the from the Convenience Store News regarding the Stimulus package:

Other measures relevant to c-stores include a final approval of $200 million for the Leaking Underground Storage Tank (LUST) Trust Fund, which assists in the cleanup of abandoned gas stations, but will not pay for inspections or to assist state reimbursements programs.

Superfund Cleanups: $600 million was provided to U.S. EPA’s superfund program.  However, these funds will be obligated mostly through existing contracts and Interagency Agreements.  In 2009 there could be as many as 20 Superfund sites ready for construction, but not funded due to budget shortfalls. The Recovery funds will begin to address those sites, plus accelerate construction at many of 600 sites where work has been limited in the past by funding constraints.

Ohio EPA has begun soliciting projects for its Drinking Water and Wastewater Revolving Loan Programs.  However, projects must already have been planned and reviewed by Ohio EPA for inclusion on project planning lists.  For instance, drinking water projects must be on the Drinking Water Project Priority List (PPL).

II.  Renewable Energy- the American Recovery and Reinvestment Act of 2009 bill is anticipated to provide around $43 billion for renewable energy in the form of tax breaks and other incentives

The extended entry includes a summary of the renewable energy incentives and investment as assembled by the American Council on Renewable Energy (ACORE). (the link provides you a hard copy of the ACORE document- which does a great job of assembling the relevant information for renewable energy incentives- or see the extended entry for a summary).…

END_OF_DOCUMENT_TOKEN_TO_BE_REPLACED

On August 20, 2008, the Public Utility Commission of Ohio (PUCO) put forth proposed rules governing alternative and renewable energy sources.  The rules main purpose was to govern implementation of the State’s new Advanced Energy Portfolio Standard (AEPS) established in Senate Bill 221.  The AEPS is broader version of a renewable portfolio standard (RPS) adopted by other states…

Governor Ted Strickland made his State of the State speech today.  While almost the entire speech was focused on education there were a few interesting nuggets relative to Ohio’s progress in developing green jobs.

"Over the last three years, Ohio has led the nation with 350 new or expanded facility projects in the renewable energy 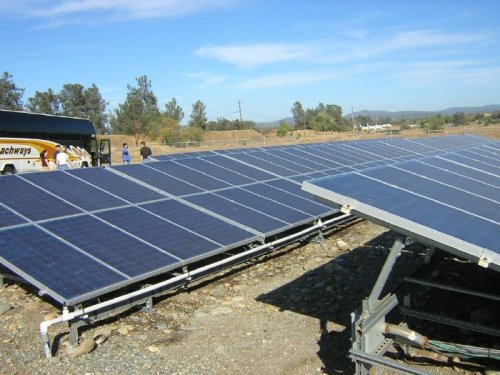 When a former Secretary of State (George Shultz) and a Vice President (Al Gore) can’t seem to navigate local ordinances to install solar systems on their own homes, what are the chances for everyone else?

On Friday, November 7th, the Ohio Air Quality Development Authority (OAQDA) held a bidders conference to launch the Advanced Energy/Job Stimulus Program.  The Job Stimulus package set aside $150 million (over three years) to increase the development, production and use of advanced energy technologies in the state.